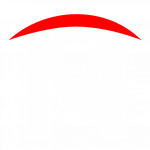 When the files reside in SOLIDWORKS PDM, before they can be saved in SOLIDWORKS, the files must first be checked out from a workflow state which allows file check out. The files can then be opened and saved in the newest SOLIDWORKS version and checked back in. This manual file version upgrade process can be very time consuming when working with many files.

Note: the File Version Upgrade tool upgrades SOLIDWORKS part, assembly and drawing files only (sldprt, sldasm, slddrw). All other file types must be updated manually, including SOLIDWORKS template files. If you need to update SOLIDWORKS files outside PDM, use the SOLIDWORKS Task Scheduler.

Why do SOLIDWORKS files need upgraded?

After upgrading SOLIDWORKS to a new major version and before changes can be made to existing SOLIDWORKS files saved in previous versions, the existing files must be converted to the upgraded SOLIDWORKS version. This file version upgrade allows files to take advantage of any enhancements to features and software code released in the new major version. SOLIDWORKS automatically converts the files the next time they are opened and saved in SOLIDWORKS. If a file is closed without saving to upgrade the version, then the file must be converted again the next time it is opened in the upgraded version of SOLIDWORKS. Once a file is upgraded, it can no longer be opened for edit in previous versions or SOLIDWORKS.

CAUTION! This tool is for PDM Admins only

The example images in this article contain default options and example file locations. This does not imply MLC CAD Systems recommends certain options over others. You are responsible for determining which options pertain to your PDM environment and company standards prior to running this tool.

How to Install the File Version Upgrade tool

Double-click the File Version Upgrade.exe to launch the InstallShield Wizard. Follow the prompts to complete the install. 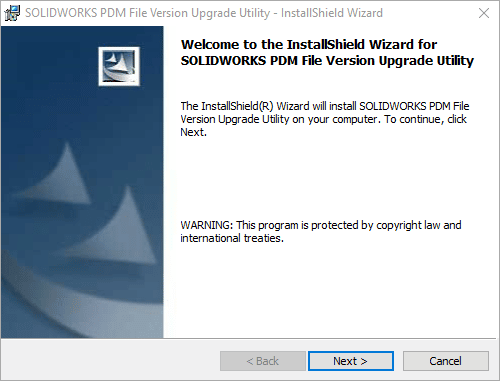 Once complete, the File Version Upgrade application will display in your Windows Start menu under SOLIDWORKS PDM. Click the application once to launch the tool. 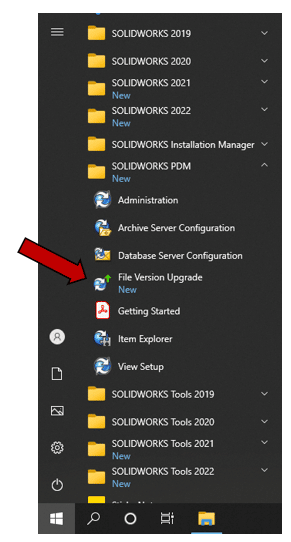 How to Configure and Run the File Version Upgrade Tool

This example uses a default installation with only a few example files as a general overview of the tool’s functionality.

On the Welcome screen, select the option to Initiate a new upgrade process (Coordinator Workstation) and then click Next > 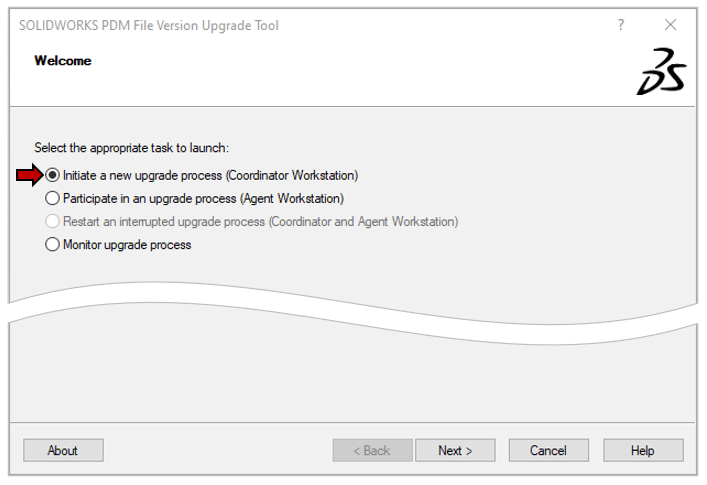 On the Select Version screen, select the version of SOLIDWORKS you will be using for the upgrade and then click Next > 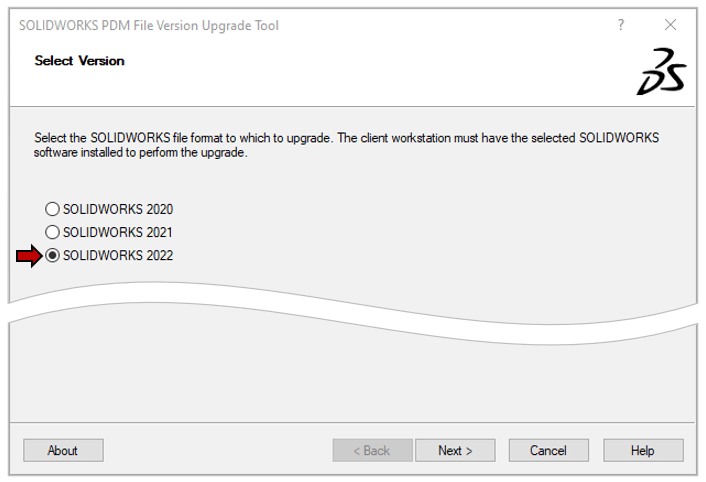 On the Select Vault screen, select the vault where the files reside to upgrade and then click Next >

Log into PDM if prompted with the standard PDM login dialog. 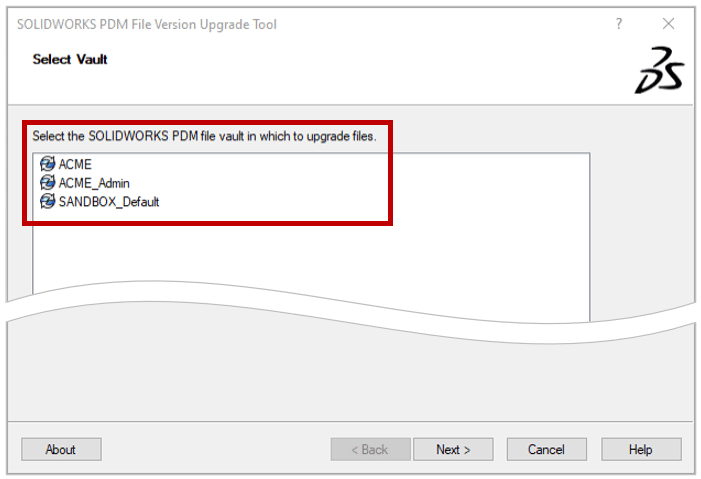 On the Search Files to Upgrade screen, you can input conditions for SOLIDWORKS file types to upgrade, folders, states, or files with specific variable values. If you do not want to apply any of these additional filters, simply leave them at their defaults. Once you are satisfied with your selection, click Next > 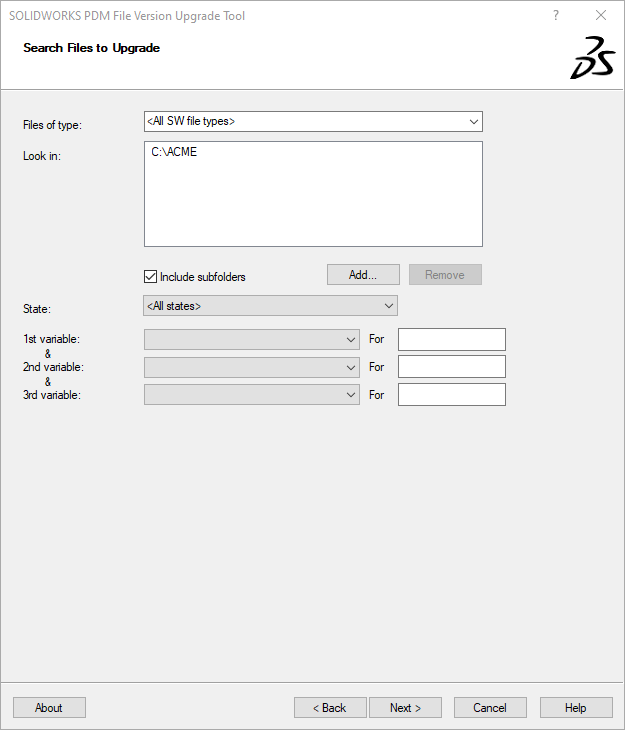 The Search Results screen displays a list of files that met the search criteria set in the previous screen. If needed, you can uncheck files individually to not include them in the upgrade. Click Next > to continue. 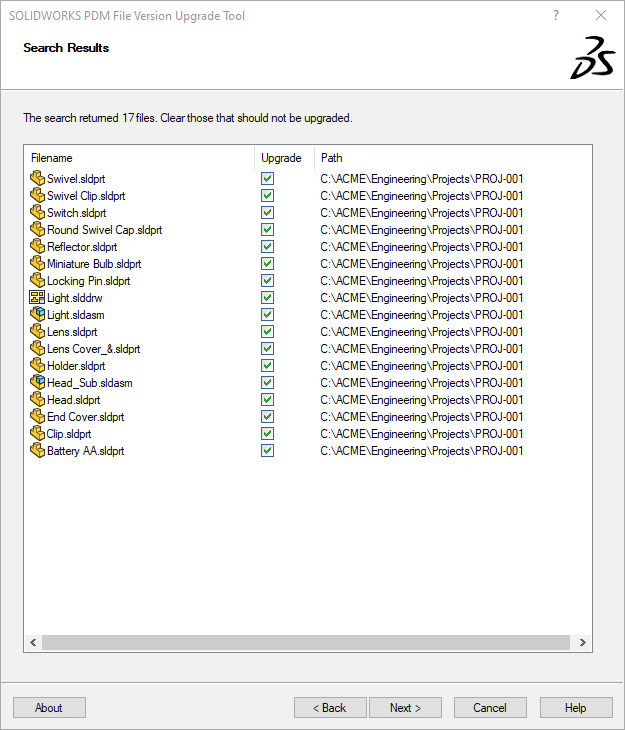 Choosing to Create new version of files includes additional decisions/options for how to manage file references and revisions.

Choosing to Overwrite the existing versions of files will save space in the archive, however, if an unexpected event occurs which causes the upgrade to fail, you could risk losing data.

Choosing to Overwrite the existing versions of files also requires decisions/options to overwrite all versions, only the latest version, or versions with revisions.

Note that overwriting all versions or versions with revisions will extend the upgrade process time considerably. 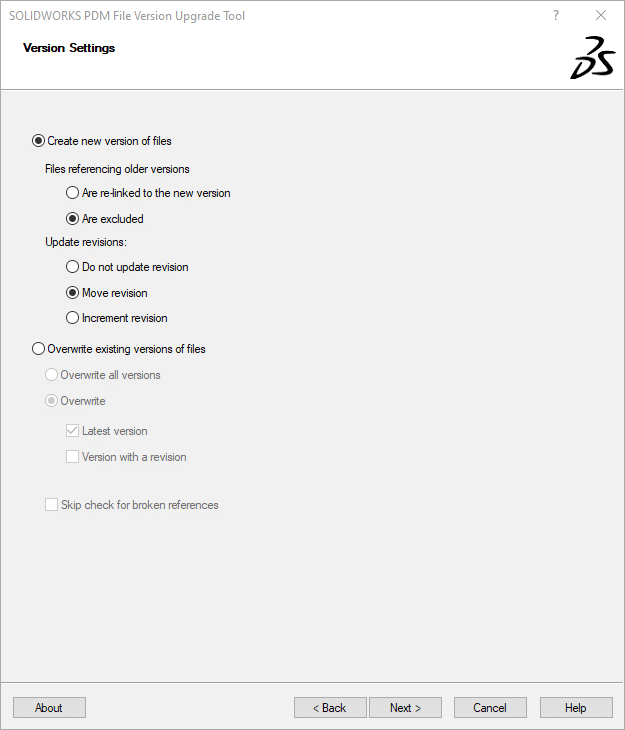 The Upgrade Settings screen contains input fields for a comment to be added to the history as well as additional upgrade settings, including a log file location. The Comment filed is required and will display when reviewing a file’s history. Consider adding a version specific comment.

If your vault contains thousands of files, you may want to consider selecting the option Divide the upgrade work into multiple instruction files to run in batches. With this option unchecked by default, the tool runs all files as a single batch from start to finish, checking all files out as a batch, opening each one in SOLIDWORKS, and then checking them all back in as a batch.

Tip: You can use PDM search in your vault to search for all SOLIDWORKS files by using *.sld* in the file name search. Then you can decide as to how many batches you may want to configure to run.

Lastly, at the bottom of the dialog, you can choose to Notify success/failures to users. These are PDM users and the system will use your PDM messaging system settings. 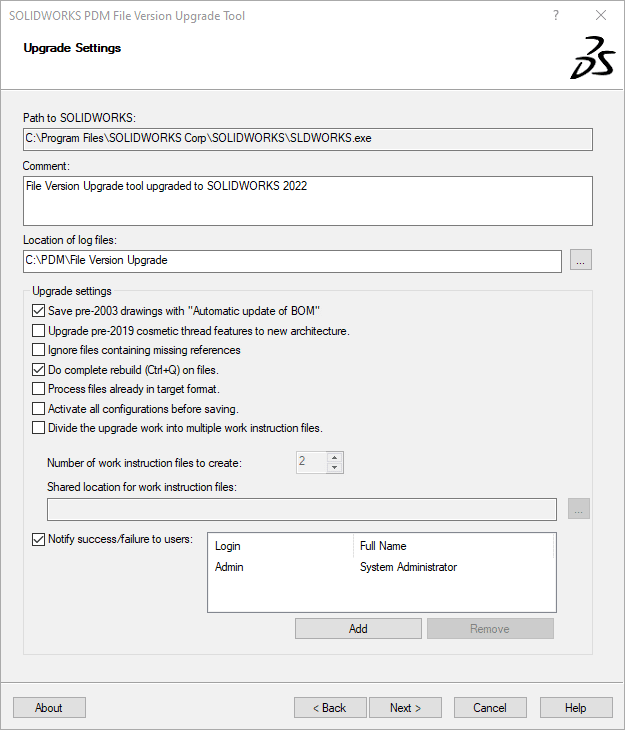 On the Ready to Upgrade Files screen, a summary displays the number of files and batches to run. You can choose to start the upgrade process now by selecting Continue or clicking Cancel to close the dialog and run the work instructions files individually later.

It is recommended to run the upgrade outside of normal PDM working times, since the process will slow PDM performance as well as make certain files inaccessible while upgrading. This process can also be run from several machines to speed up the upgrade process. 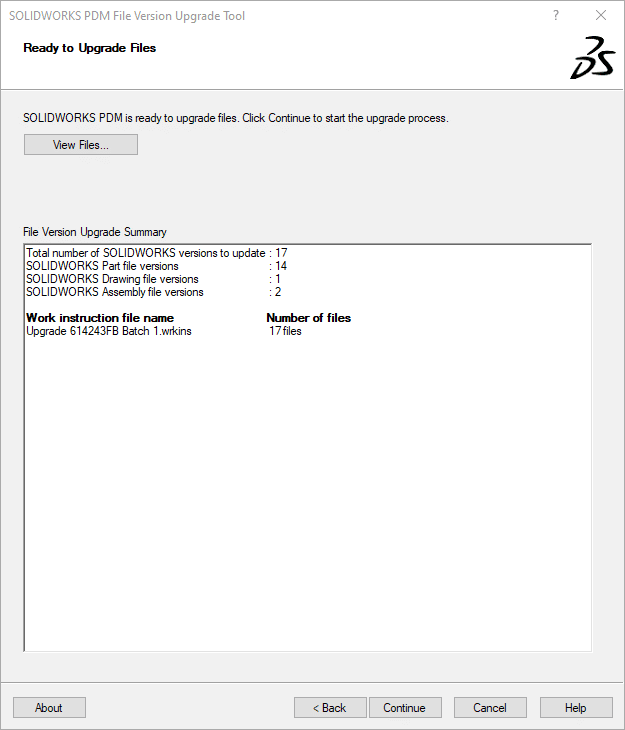 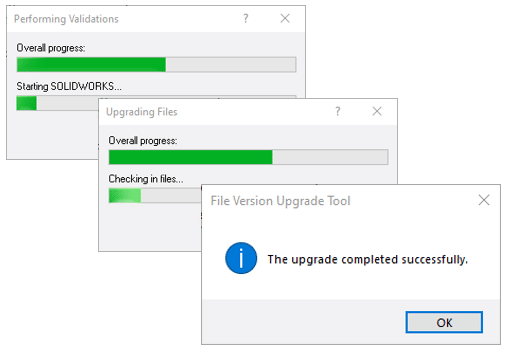 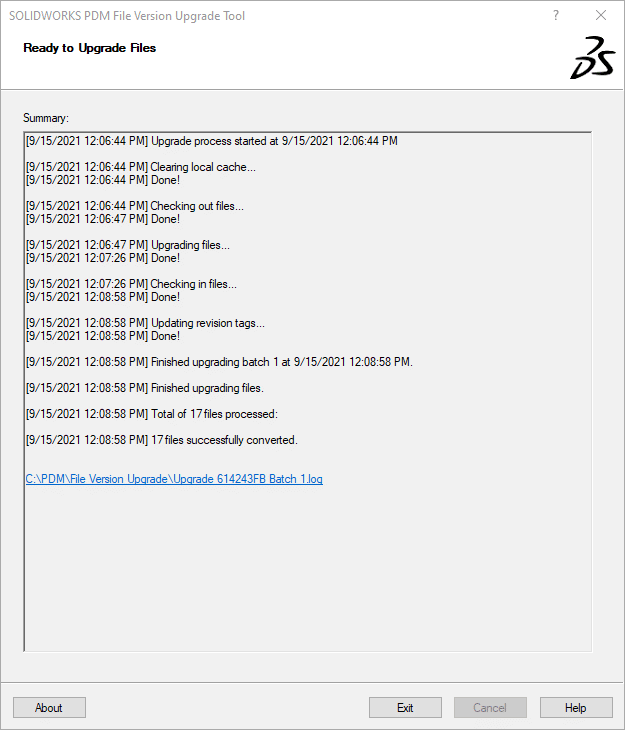 Review the history of files to see the added comment and any version number changes. 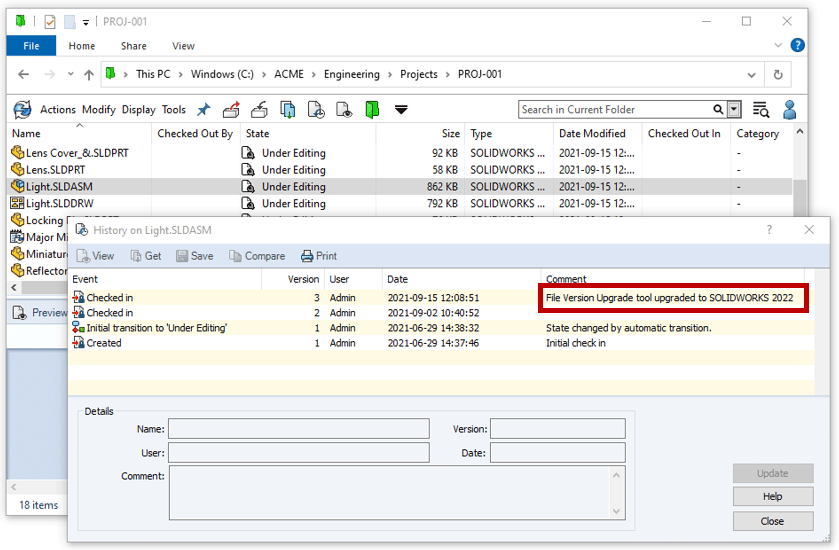 How to Run a saved Work Instruction

To run a saved work instruction (.wrkins), you must choose the option on the Welcome screen to Participate in an upgrade process (Agent Workstation) and then click Next >

Different Work Instruction files can be run on different computers with a local vault view and same major version of SOLIDWORKS. 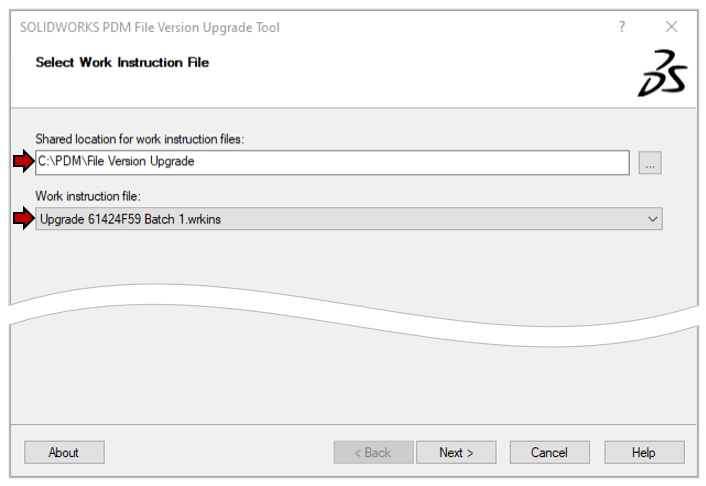 Review the Work Instruction File Summary and then click Next > 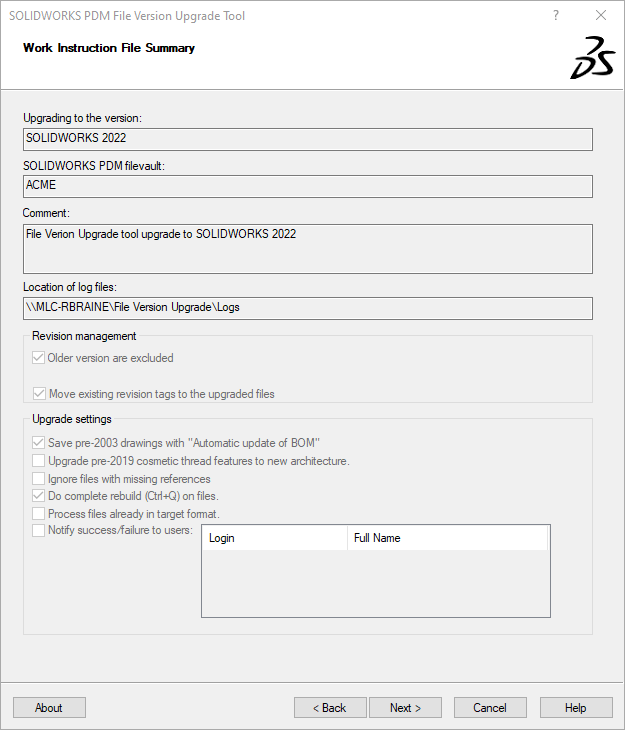 On the Ready to Upgrade screen, click Continue to run the upgrade. 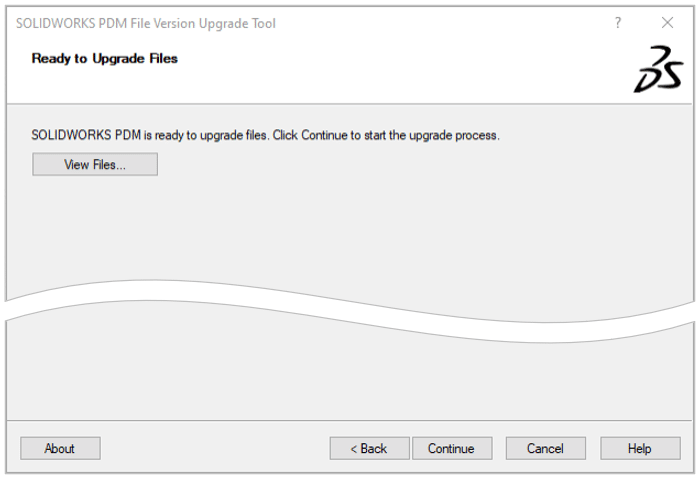 Status dialogs will display during the process and then a confirmation summary once complete.

byRick Braine
SOLIDWORKS Buy One Get One 50% Off!Act Now
+
Scroll to Top